Safe Sex Toys for Your First Night Together

Comment are off
The BootyCall Master
body lotion, cockblock yourself, sexy way to explore her body, to satisfy her, to tickle her 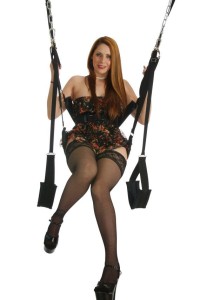 It will be funny getting into, but this elevated sex toy is going to make it fun and really awesome once you get the swing of it (yeah, that was intentional). Your first night together should be fun and carefree with passion mixed in. The fun part is laughing as you hook her up into the swing and the passion is once the both of you realize how awesome sex can be once you’re in there.

Not necessarily vag ticklers, but other varieties that are actually supposed to tickle her. Ticklers can range in size from a feather at the end of a two foot long stick to just a fluffy feather by itself, if you’re getting the soft variety. It’s very easy to use obviously, so no one will be intimidated. On the other hand you can purchase ticklers that have long beaded strings. The entire string is made out of metal, sort of like the connectors on a tag that goes on your suitcase. Get yourself some water, either hot or cold, and add some temperature play to your night. It’s a sexy way to explore her body and she’ll love the sensations. 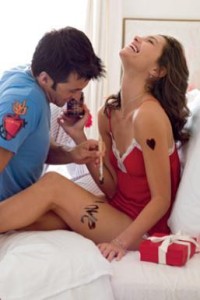 “Lick her body and give her love bites”

“Edible sex toys” is sort of an umbrella term for anything that can be eaten. Edible panties, flavored lube, fireworks body lotion, and so forth all can be slathered onto your lover’s body and consumed. The best one to try for a new night would be the flavored lube, but if you’re really looking to impress her then bust out the fireworks body lotion. It looks like an oil, but isn’t as slick. Use it anywhere on the body, but the best places are the nipples and crotch. After spreading it around, blow on it. The whole reason that it’s called “fireworks” is because it heats up with your breath. With this stuff, you can take oral to a whole new level.