When There’s Another Guy: How to Avoid Him and Get What You Want

Comment are off
The BootyCall Master
get into her good graces, looking for an affair, romantic partners, to get angry 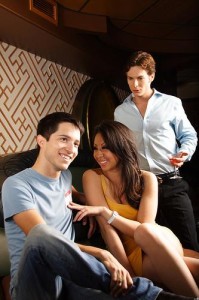 “Do you think you can get her?”

We’ve all been there – there’s a gorgeous woman you want to sleep with, but there’s another man present. Whether that means it’s just some guy hitting on your hookup you’ve only just met at the bar, a boyfriend, or even her husband, it all comes back to the same basic principle. The woman you want to take to bed has someone else, and you have to find a way to get around him.

When it comes down to it, our instincts are pretty simple. We tend to want to defend what we consider our territory. That’s not to say that it’s okay to think a woman is yours – that’s a little over the top. At the same time, that inherent urge is there. If you go hitting on a woman with a man, he’s going to get angry, or worse.

Here are a few tips on how to deal with this scenario and get around the other guy.

If a woman in the club catches your eye, you might find she already has a guy that’s sticking around. There’s a few ways to approach this. Evaluate whether or not she actually wants the other guy sticking around. It’s very easy to get into her good graces if you help her deal with unwanted attention and tell the other guy to go away. You have to beware becoming the new leech in that case, but if you’re friendly and smile, chances are she’ll like you even more. 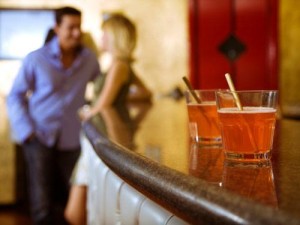 “Don’t assume that she is alone”

Sometimes it’s hard to tell whether or not a woman’s male friends she’s with are romantic partners, or just friends. One good way to tell is trying to deduce if they’re gay. If they’re gay, then obviously the only thing you have to win from them is their approval. On the other hand, if you realize she’s with a boyfriend, there’s still a way to get her into bed.

Charm her away from her boyfriend and buy her drink. Act friendly. Honestly, this tactic works a lot better if you at least know the woman or have mutual friends. Unless she’s looking for an affair, appearing out of thin air and offering to buy her a drink isn’t going to win her interest.

Her Husband Is Watching

This applies more to online dating than anything else. If she has a husband and she’s looking for a fling on the side, stay as far away from her life as possible. Don’t go near her home, don’t go out with her to public places, and don’t be seen meeting her. Conduct all of your hookups with the utmost discretion, and don’t assume you’ll be safe. The best type of husband when you’re hooking up with a married woman is one that’s out of sight, out of mind.

Whatever happens, make sure you know what she’s looking for. That can also be disastrous if you’re looking for two different things and she feels like you led her on.