How to Tactfully Split the Cheque with a Woman

Comment are off
The BootyCall Master
bankrupt yourself, get her into bed, going to ditch you, saving money on dates, splitting the cost of the date 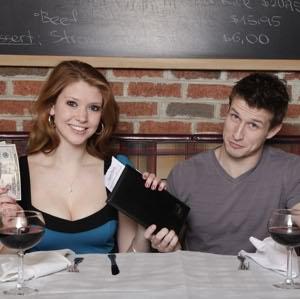 “You don’t get such nice women easily”

You can’t always pay for everything, even though most women expect a man to pony up for dates. It’s the 21st-century and you don’t have to cover every little thing. In fact, if you’re just trying to get her into bed and you’re only interested in a fling, why bother investing in an elaborate dinner and date? It’s a waste of time. We’re not saying you should treat your fling like a prostitute, just that you don’t have to bankrupt yourself to show a woman a good time. If she expects you to go broke over trying to impress her, she’s not worth your time anyway.

Apart from saving money on dates, the other option is to get her to pitch in. It’s totally socially acceptable these days, and we think by today’s standards, it’d actually be weird for her to refuse. Besides, it’s not as if you’re made of money, and she shouldn’t expect you to be. Asking her to chip for a cheque at dinner or paying for her own cinema ticket is perfectly within the limits of good taste. Here’s some advice on how to broach the subject of sharing expenses while on a date without offending her.

Preempt by Finding a Modern Woman

The best way to start saving money while out on dates is to find a woman who likes to pay for herself. This solves a lot of problems before they even start. Although it might be surprising, some women really do prefer paying for themselves, and maybe even you! While we like playing the man’s man, it’s just stupid to turn down a free meal. Go for it. If you can find the elusive modern woman, you won’t even need to broach the topic of splitting the cheque because she’ll be picking up the tab.

The Type of Cheque 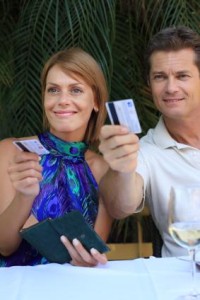 “Whose card will the waiter take?”

There are different types of cheques that come up on dates. Some are more expensive than others, and some are more acceptable to split. For example, if you take a woman out for drinks, she’s going to expect you to pay for at least one. This isn’t such a big deal in terms of cost because it’s a drink – not dinner. But when you go to dinner, that’s when you want to start thinking about broaching the topic.

How to Introduce the Idea

You’ve determined what her expectations are and whether you want to insist on splitting the cost of the date. Now you have to figure out how to bring it up without offending her. We suggest introducing the idea early on, and not at the end of the meal. Tell her straightforwardly, but with some tact, that you’re on a budget. You can also just throw it out there without “introducing” the idea. If you’re trying to pick a restaurant, mention the cost of the menu, and say, “I don’t know how much you want to spend.” By putting out there, as if you’re assuming you’d split the cheque, there’s not much she can do but accept it or ditch you. And chances are, she’s not going to ditch you.