Comment are off
The BootyCall Master
have sex with her, Interracial dating, piss her off, you are attracted to her

Interracial dating is not as difficult as people like to make it seem. Sure, there can be some huge differences between different cultures, but that isn’t a good reason to not date someone. Interracial dating can be interesting and fun. The problem with interracial dating is that many of us worry so much about not offending someone we are dating that we end up offending them anyway. To decrease your chances of upsetting your interracial date all you need to do is make sure that you avoid saying certain things that will turn her off or make her feel like you are a closeted racist.

Do Not Talk About Her Skin Color 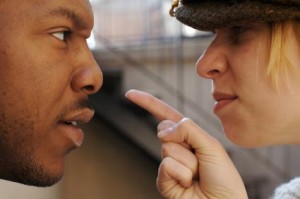 “Avoid such situations at all costs”

One of the worst things you can do when dating interracially is to focus on the person’s skin color that you were dating. Do not say things like,” I love a woman with dark skin,” or, “I love dating Asian women because of their slanted eyes.” While you may think this is a compliment, we can promise you that almost all women of these races will not share your opinion. If she does not bring up the fact of the two of you are interracially dating, then you should not bring it up either. You know what skin color you have and she knows what skin color she has. There is no point in talking about it.

If you have gotten lucky enough to have sex with her do not refer to the color of her skin is food. For instance, some black women do not like to be called chocolate, caramel, or Hershey’s Kiss. You should also refrain from saying things like ebony or onyx to describe the color of her skin. 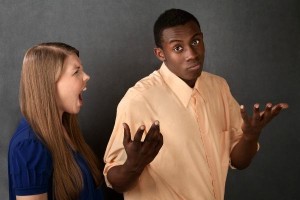 Another thing you want to make sure to never do when interracially dating is to generalize all women of a certain race. For instance, do not say that you like how sassy black women are or how cute and bubbly Japanese women are. It’s stereotypical, rude, and it will more than likely piss her off.

In all honesty, if possible you should avoid bringing up race altogether. It should not be an important element of why you want to date her. If you have a fetish for women of a certain race, you should not let her know about it. You want her to think that her race is not important to you, even if it is the only reason why you are attracted to her.

The most important thing is that you think about what you are about to say before you say it. If you think you have accidentally said something racist, apologize for it right away. Let her know that you really like her but that it is your first time dating someone of her race. Ask her to point out when you have said something that has made her uncomfortable so that you can fix your error. She will appreciate it and it will gain plus points in her favor.